I found myself needing to fit a x16 PCI Express card in a x1 PCI Express slot.  Fortunately, the PCIe standard allows for this, but you may need to perform a little hacking first.

I found on various sites that you can Dremel the end of a x1 PCIe slot to fit a larger (x4, x8 or x16) PCIe card.  However in my case, my motherboard was still under warranty, so I didn't want to alter it.  Also, the motherboard had various components in-line with the x1 PCIe slot that would have prevented a larger from fitting.  Fortunately, I had a surplus of older x16 PCIe graphics cards so I decided to cut the card instead. 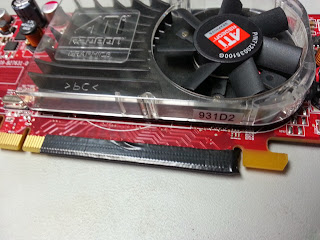 First, before I altered the card, I wanted to test the card electrically to make sure it would function properly with only the x1 connections.  To do this, I used electrical tape to cover all pins not used by the x1 connector.  I inserted the card in to a x16 PCIe slot and booted the machine.  Windows booted and the card ran without issue.

Armed with the knowledge that the card worked properly on an x1 bus, I set out to modify the card to fit.

Before I continue, I must point out that I'm not recommending anyone do what I did.  Attempting to do the same modifications will definitely void your warranty and the process will expose you to respiratory dangers (a respirator might be sufficient, but I'm not sure as the dust is exceptionally fine).  Again, if you decide to do something like this, it is at your own risk. 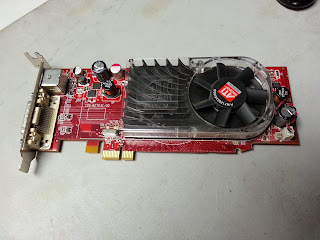 First, I used a permanent marker to mark the first pin that needed to be removed.  According the pinout, PCIe x1 only uses the 7 pins after the notch.  So, I marked and then cut the 8th pin.  I aired on the side of caution, cutting closer to pin 9 than pin 7.  Since I was using a grinding disc, I was then able to grind the PCB down a bit further toward pin 7.

Since the motherboard I was using had integrated components in-line with x1 PCIe slots, I had to remove the remainder of the pins not used by a x1 PCIe card/slot.  So, starting from the back of the card, I removed the rear hook and the unneeded pins.  The final result looked, not surprisingly, very much like a standard x1 PCIe card. 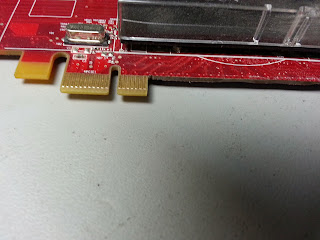 I wasn't particularly careful with my cuts near the pins that were being removed.  But, so long as I removed what needed removing and didn't damage any of the required components/pins, the poor cuts were just a cosmetic issue.  Given that the bottom of the card was facing the motherboard anyway, it didn't bother me.  I did consider placing electrical tape over the remains of the old contacts/traces, but after the modifications, the card sat comfortably away from the motherboard's components.

The whole point of this exercise was to add a second PCIe graphics card to a motherboard that had only one x16 PCIe slot and two x1 PCIe slots.  In this scenario, the x1 PCIe card would obviously exhibit very poor gaming performance.  Fortunately, I only wanted an additional graphics card so that I could add additional monitors for general productivity 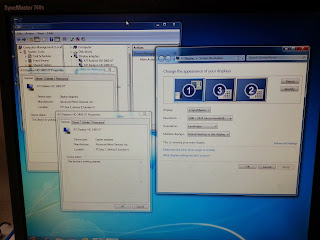 It is debatable if the risk to the card/your health is worth the modification. But, at least from a technical standpoint, it is possible to install a x16 card in an x1 PCIe slot.

Addendum: In my research, I also came across the YouTube video below.  It shows someone performing the same procedures.  As I mentioned earlier, note that they are wearing a respirator while cutting the card.  Exposure to dust created from grinding the PCB/components could present serious health concerns if inhaled.