I was faced with an issue where I had multiple users that required a wireless profile to be setup.  Unfortunately, the powers that be, determined that the wireless settings should be as complicated as possible.  To make things easier, I came up with the following way of automating the setup of a wireless profile on Windows 7.


The wireless adapter must be on/enabled for netsh to be able to import or export a wireless profile.

In this example, I will be exporting the "VanEtta" profile by typing the following:

Next, open the file in notepad.  It will look similar to the following: 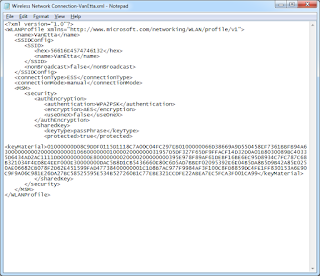 We are going to "convert" this XML file in to a batch file that automatically configures the wireless profile.  I developed the following script that you can use at the start of your XML:

Simply copy the above code and paste it before the start of the XML as follows: 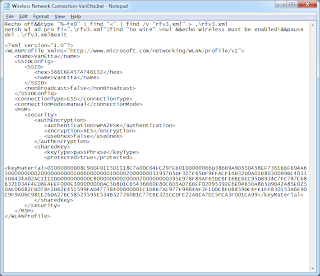 Finally, save the file as a batch file by changing the file extension to ".bat" (or ".cmd").   Make sure that you place quotation marks before and after the file name so that notepad doesn't attempt to change the extension back to ".txt". 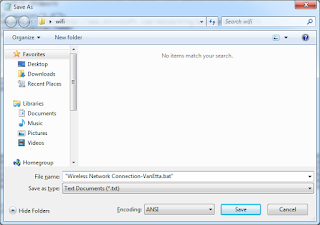 A couple caveats: The script will only work when wireless is enabled.  Also, it isn't written in a way that will work from a network path; if this is something you require, you can use pushd/popd to temporarily map a drive letter to the network path.
Posted by Rob at 10:08 PM